Soils Come into the Limelight in 2015: Growing Awareness of Soils in Addressing Global Challenges

The UN has designated 2015 the International Year of Soils, an effort to bring attention to the long overlooked role and value of soils in addressing many of the world’s challenges, including providing for more productive and healthier food production, building resilience against erosion, nutrient loss, and drought, supporting the livelihoods of smallholder farmers with improved production and more efficient use of inputs, and even as a sink for excess carbon dioxide emissions contributing to climate change.

In fact, the growing recognition of soils as a valuable asset has been building for years, as resources have poured into figuring out how to feed 9 billion people by 2050. Nearly 40% of land that is suitable for agriculture is classified as degraded or seriously degraded, with pressures from development, pollution, and climate change threatening to shrink what’s left. A 2014 study by the Montpellier Panel finds soils degradation especially dire in Africa, with about a quarter of soils affected in the sub-Saharan region alone.

On the human timescale, soils are a nonrenewable resource; it takes hundreds to thousands of years to generate an inch of topsoil. It follows then to try to sustainably produce more from the land we have, and to improve poorer quality soils where possible to expand the acreages of arable land.

Most approaches to improving soil fertility fall within the conventional paradigm of using fertilizers to compensate for nutrient deficiencies and maximize yields. However, the frontier is in conservation agriculture – a set of practices that seeks to improve the overall health of soils, so that it can more robustly and sustainability perform its many ecosystem services – and where improved yields are a co-benefit, not end goal. Conservation agriculture practices emphasize minimal soil disturbance, keeping the soil covered, and diversifying the crops grown.

Datu Research, a Durham, NC-based research consulting firm, is one SBAIC member actively working on soil health and conservation agriculture. As part of a U.S. Department of Agriculture Conservation Innovation Grant project, the firm is currently documenting in four case studies the economic returns of soil health-building practices, and is playing a key role in developing standard economic methodologies for collecting and evaluating on-farm data of these practices. The goal is to provide the economic evidence most farmers say is a deciding factor in whether to adopt. “Conservation agriculture practices like no-till and cover crops keep soil in place and can help improve nutrient levels and soil health,” explains lead analyst Sarah Mine. “This creates real benefits, both environmental and economic. What we want to know is: How much of that benefit accrues to farmers?” Datu also recently conducted a value chain study of commodity corn in Iowa to identify potential economic incentives.

In addition to economic incentives, the technical and practical needs of information, education and extension are key to improving soils. The strongest soil management plans are customized to the producer’s soil types and farm management practices, while also being sensitive to socio-cultural aspects like gender. All this information about the farm and the soils, which may require soil testing, needs to be gathered. The extension agent must then be able to interpret this information to devise an appropriate management plan. The producer needs to be equipped with the resources, including labor and instructions, to execute the recommendations. The challenges to achieving this vision are readily apparent: How can a smallholder farmer afford soil testing? Is there a centralized resource like soil maps that extension can access? Where can the farmer get financial or other support to implement recommendations?

The Global Soil Partnership of the UN Food and Agriculture Organization is leading the international community’s work towards adopting sustainable goals for soils, the results of which will eventually trickle down and help address these farm-level needs.

The USAID’s Bureau for Economic Growth, Education and Environment (E3) supports soils indirectly via its policy and economics work, notably by encouraging stronger governance structures, such as land tenure rights, in order to empower citizens and communities to protect nature resources like soils.

To date, soils are largely treated as components of various international efforts (e.g., natural resource protection or poverty reduction initiatives). As momentum builds in understanding the fundamental role of soil health in solving many of the world's most pressing problems, we expect, and hope, for more proactive efforts directed solely on improving global soil health. 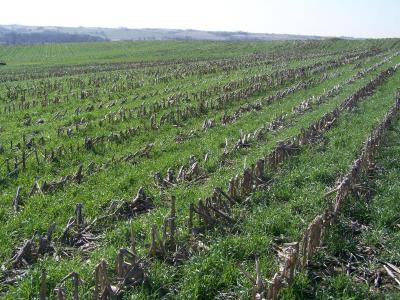