Well-functioning public finance management is a key element of democracy and good governance in a given country, creating grounds for a transparent, accountable and efficient state. Over the last 7 years, the Policy and Management Consulting Group (PMCG) has been actively working with government institutions at all levels to build the necessary capacities and developing organizations to establish good governance practices.

In 2011, USAID launched a multi-year program, Good Governance in Georgia (G3), which aimed to improve transparency, accountability and institutional efficiency at all levels of the Government of Georgia, in order to provide better services to citizens and to enhance communication channels between government institutions, civil society and citizens of Georgia. In 2013, Management Systems International (MSI), USAID’s prime contractor, subcontracted to PMCG to develop and enhance the institutional capacity of the Government of Autonomous Republic of Ajara (GoARA) – one of the largest and most economically active regions in Georgia – in program budgeting.

PMCG’s Project Team has been focused on introducing the best international practices in public finance management and building capacities to ensure the sustainability of these changes. The primary goal of the intervention was to reform the traditional input-based budgets and support the government in moving to program-based budgeting, being aligned with the multiyear strategic development plan of the government.

The traditional input-based budgeting system provided limited information on the outputs and outcomes of the public spending, and only disclosed information by line items of spending, rather than clearly showing the planned programs, activities, outputs or outcomes. In addition, the one-year plan in the budget had weak links to government strategies, and it was almost impossible for citizens to track the development of the government programs – especially multiyear activities as the budgets were only covering a single year period.

Moreover, the traditional input-based budgeting system was not treated as a planning document of a given government institution, but rather as a finance document that was dealt with by the finance departments with minimum input from the sector policy makers, resulting in weak links to sector policies and planned activities.

The limited information disclosed was a primary impediment in building transparency and holding the government accountable for public spending. This also resulted in a lack of citizen engagement in the process of designing programs and navigating strategic directions.

The assistance was provided over a nine-month period, covering the whole budget cycle, starting from designing the Medium Term Expenditure Framework – a high-level strategic directions document of the government – and ending with approving the program-based budgets, including public consultations at each level.

The project involved working with the whole government of Adjara, including the Chairman’s Administration, all of the four line Ministries of Adjara, and four sub-agencies. The wide scope of the project’s coverage made the process difficult on one hand, but on the other, it was one of the key factors in achieving success and changing the budgeting practice at each and every agency responsible for spending the taxpayers’ money. 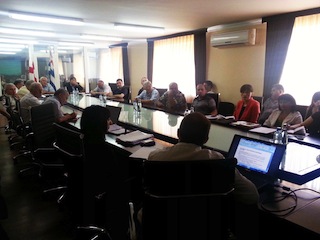 At the initial stage, the team conducted assessment and analysis of the GoARA’s existing program budgeting planning process and conducted round-table discussions with the key stakeholders to discuss the findings. The project assisted the government in designing the Medium Term Expenditure Framework, including government programs for the medium term period (3-5 years). The activity engaged stakeholders far beyond the Adjara government’s finance department staff including the senior management of the agencies, sector specialists, CSOs and various interest groups.

During these processes, citizens and various interest groups participated in the process of designing programs and discussing draft budget in terms of anticipated activities and results. Before finalizing the program budget, public discussions were held to present the draft budget to citizens.

In addition, the project team has designed a detailed program budgeting manual that contains the standard program budgeting process complete with deadlines and responsibilities, all necessary forms for developing a program budget, clear instructions for utilization of the referenced forms, and citizen engagement mechanisms in the process of designing and implementing the budget.

As a result of this comprehensive approach, and its engagement with stakeholders, the citizens of Ajara gained a more effective and transparent government, disclosing activities, outputs and outcomes with respective key performance indicators, enabling effective monitoring and evaluation of the budget execution.

Overall, the project achieved the following:

·       Enhanced effectiveness of the government in planning and executing programs

·       Increased level of citizen engagement in the budget process