After serving two six-year terms as the President of Liberia, Ellen Johnson Sirleaf will respect the term limits set by the Liberian Constitution and will not run in the October 2017 elections. These elections will be an important milestone for Liberia. Without an incumbent, the country must democratically elect a new leader, and it is more important than ever for the NEC to peacefully conduct free, fair, and credible elections.

The NEC was created after the National Transitional Government of Liberia was established at the close of the 14-year Liberian civil war in 2003.  With substantial military and administrative support from the UN Mission in Liberia (UNMIL), the transitional government slowly introduced stability to the country and prepared for Liberia’s first post-war presidential elections in 2005.  During this transitional period, new electoral laws were passed and the NEC was created to manage the election process.  The 2005 elections, won by President Ellen Johnson Sirleaf, were generally regarded as free and fair by international observers.  One election observation mission, conducted by the National Democratic Institute and the Carter Center, praised the efforts of the NEC, but noted that the election’s success would not have been possible without UNMIL’s “substantial technical, operational, and logistical support”.

The next presidential elections were held in 2011, this time under the full responsibility of the NEC.  While international observers ultimately considered the election a success, the NEC still relied heavily on the United Nations Development Programme (UNDP) and USAID for support.

Given the importance of free and fair elections for improved governance, USAID made a commitment in its Country Development Cooperation Strategy for 2013-2017 to support the NEC’s capacity to perform its mandate. USAID’s Liberia Administrative and Systems Strengthening (LASS) project, recently awarded to SBAIC member IBI International, is designed to improve the NEC’s administrative performance.  USAID also supports the NEC through a corollary project implemented by the International Foundation for Electoral Systems, to improve voter registration and education, political party support, and other areas.

Emphasizing ownership of the process by the NEC and a focus on measureable results, IBI International – Formally International Business Initiatives – is using a problem-driven approach to supporting the NEC that focuses on addressing performance gaps in several key administrative areas, including financial and human resources management, procurement, asset management, information technology, and monitoring and evaluation.  Each of these fields is critical to the success of the NEC in planning for and administering the 2017 elections.  Using IBI International’s assessment methodology, field-tested in other Government of Liberia agencies, the LASS project has begun by examining both environmental and individual level performance factors. Through a technical working group comprised of IBI and NEC staff, the project is engaging with NEC staff at all levels to identify the most pressing performance gaps and address them through a combination of global insights and local solutions.

As the NEC is strengthened, some of the limitations observed in the 2011 election will be corrected. For example, in its report on the 2011 elections, the Carter Center noted that the NEC lacked the capacity to conduct campaign finance audits.  With improvements in public financial management, the NEC will be able to conduct these audits, which should increase transparency and decrease tensions between political parties.

The NEC also suffered from insufficient asset and fleet management capacity in 2011, but fortunately it received substantial support in this area from UNDP.  UNDP hired numerous trucks, motorcycles, and canoes to help distribute polling materials across Liberia in time for the elections.  While this was effective at the time, the NEC will need to assume more of this responsibility before 2017.

Strong human resources capacity will be essential to the NEC’s success in 2017.  In its report, the Carter Center noted that better training was needed for both the staff administering voting booths and the workers responsible for tallying votes.  While they also noted that errors were rarely, if ever, deliberate, the inconsistent application of election policies contributed to public distrust of the NEC.

IBI International’s participation in the LASS project’s efforts to strengthen the NEC’s administrative abilities in the years leading up to Liberia’s 2017 elections, will aid the NEC’s ability to lead the democratic process in this pivotal moment of Liberian history. 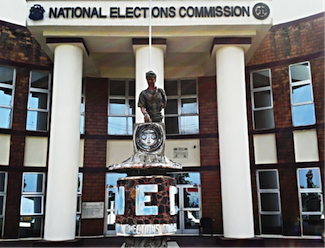 The National Elections Commission building in Monrovia features a statue of a person submitting a voting ballot.